A few weeks ago, Dong Quan Ngoc Nguyen (University of Notre Dame) came to visit here at Purdue.  We spoke a little about the computer package Bertini (created by Daniel Bates, Jonathan Hauenstein, Andrew Sommese and Charles Wampler) and whether the homotopy continuation method can be used to compute Belyi maps and Shabat Polynomials.  I’ve been working on setting up a system of polynomial equations whose solutions give the coefficients of the Belyi maps, so it really comes down to actually finding the solutions to these equations.  The hope is that a polynomial homotopy continuation method will be much more efficient than say, using Groebner bases, to find all solutions!

Let me try and set up how this would work by working through some explicit examples.

Say that we have a connected planar bipartite graph

as well as “white” vertices

, and the “midpoints” of the faces are

which satisfies the following:

is a Belyi map, and

is said to be a Dessin d’Enfant.

Computationally, I find working with connected planar bipartite graphs very difficult, so instead let me work with its valency list. Denote

and denote the positive integer

, each expressed in terms of the coefficients of the polynomials 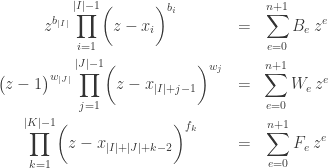 each as elements of

.  The following is relatively trivial to prove.

Proposition 1. Continue notation as above. 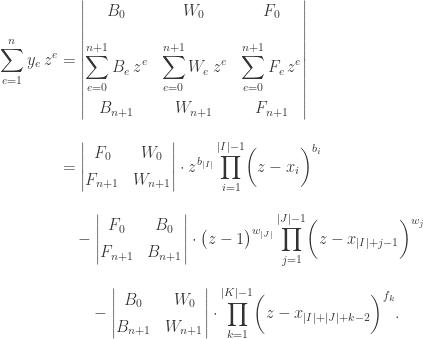 Given a degree sequence

very quickly. I would like to find the points

as that extension of

which is the field generated by the coordinates of the points

I would like to use Bertini to complete Step #1. My graduate student Jacob Bond has code which can perform Steps #2 and #3 relatively quickly.  I’ll say a few more words below when I discuss some examples.

Let me discuss a class of examples in some detail. We say that a connected planar graph is a tree if it has only one face.

I will view it as a bipartite graph by coloring its vertices “black” and placing “white” vertices at the midpoints of the edges. Assuming there are

edges, its degree sequence is in the form

where we must have

is odd. The following result is closely related to the one above, but the notation is not quite the same.

Proposition 2. Continue notation as above. If we can find

is identically zero as a polynomial in

, then the tree of interest is the Dessin d’Enfant of the Belyi map

This Belyi map is not just a rational function of degree

; it is a polynomial. We say that such a Belyi map is a Shabat Polynomial. Note that there are

, so again we can construct an algebraic variety

of dimension 0 and ask for all points

Given a collection of

very quickly. Remember that the goal is to find the

such that we have the

. We have a degree sequence

, so we must have

. We have the polynomial

. Hence the Shabat polynomial must be

. We have a degree sequence

, so up to permutation we must have

. We have the polynomial

, we find two solutions: either

. We throw out the first solution because we will need to divide by

, so from the second solution we find the Shabat polynomial

edges. It has degree sequence

We have already seen this when

as in the two previous examples.

We are interested in an identity of the form

th root of unity. If we choose

then we recover the identity

. Hence the corresponding Shabat polynomial is

Now consider any tree with

edges having the degree sequence

, we have the polynomial 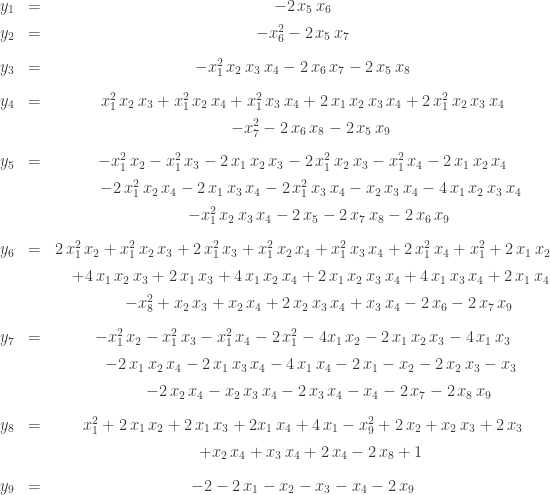 Question. Can Bertini find all solutions to

I only know that one solution corresponds to

. In particular, one set of identities which works is as follows:

we find a corresponding Shabat polynomial

it is easy to verify that a completely different set of identities is as follows:

, we find that a completely different polynomial:

Edray Herber Goins grew up in South Los Angeles, California. A product of the Los Angeles Unified (LAUSD) public school system, Dr. Goins attended the California Institute of Technology, where he majored in mathematics and physics, and earned his doctorate in mathematics from Stanford University. Dr. Goins is currently an Associate Professor of Mathematics at Purdue University in West Lafayette, Indiana. He works in the field of number theory, as it pertains to the intersection of representation theory and algebraic geometry.
View all posts by Edray Herber Goins, Ph.D. →
This entry was posted in General Remarks, Uncategorized. Bookmark the permalink.